Kim Kardashian does it again 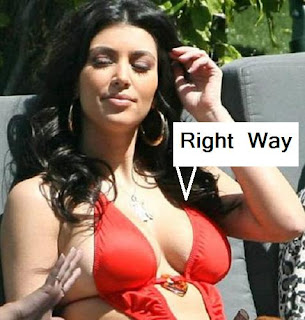 Kim, stop talking to those aliens, they give you bad information...


After going through my blogroll, Dou-La-la wrote about how Kim put her foot in her mouth again.  Of course, I could not resist adding part 2, to her seemingly ongoing parade on breastfeeding non-sense.

About 2 months ago, her careless insouciance outraged lactivists all over the globe, with her commenting on how gross it was that a mother was nursing her baby in public (GASP!). The topic was so hot that even E! Entertainment spoke about her breastfeeding bombshell. 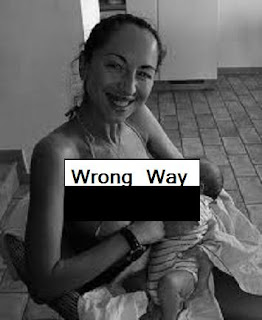 The fire has since died, (but I'm eager to see if they covered it in the upcoming season), but Kim insists on getting it wrong again. Jeez Kimmy, when are you gonna learn a thing or two from the sister you all keep dragging down??

In a recent interview for Allure Magazine, she said;

She plans to breast feed her kids for at least 6 months: “They say after a year there’s no nutrients.”

Who says, Kimmy? Who?

The lizard people living in the amazon?

Let's take a look at this statement in a factual light now. I happen to believe that we were created in a very good way, in a way that is orderly and logical. Having thus said, how logical would it be for a lactating woman's milk to all of a sudden have no nutritional benefit at the one-year mark. Do our breasts know of the impending 365th day, and start shutting down?

Did you know that as long as there is stimulation to the mother's breasts, they continue to produce milk? Why? Why is it only when the baby stops nursing, that her production ceases? Because that's the way it goes. And, imagine that upon completing a year, the milk had no nutritional value. Why would a mother keep on making milk then? If it had no nutritional benefit, then what would it consist of? Koolaid?

Research shows that babies may benefit from nursing beyond one year. One benefit is nutrition. Research has shown that second-year milk is very similar to the first-year milk nutritionally (Victora, 1984). Even after two years or more it continues to be a valuable source of protein, fat, calcium, and vitamins (Jelliffe and Jelliffe, 1978).

A second benefit is immunity to disease. The immunities in breast milk have been shown to increase in concentration as the baby gets older and nurses less, so older babies still receive lots of immune factors (Goldman et al, 1983). A study from Bangladesh provides a dramatic demonstration of the effect these immunities can have. In this deprived environment, it was found that weaning children eighteen to thirty-six months old doubled their risk of death (Briend et al, 1988). This effect was attributed mostly to breast milk's immune factors, although nutrition was probably important as well. Of course in developed countries weaning is not a matter or life and death, but continued breastfeeding may mean fewer trips to the doctor's office.

A third health benefit is avoidance of allergies. It is well documented that the later that cow's milk and other common allergens are introduced into the diet of a baby, the less likelihood there is of allergic reactions (Savilahti, 1987).

Any mother who has nursed an older baby knows the tenderness and feelings of closeness generated by nursing a little one who is old enough to talk about it. We don't need medical journals to tell us it's rewarding for mother and baby. But has anything been documented and published on these benefits?

One paper written by a female psychiatrist (Waletzky, 1979) recommends natural weaning. She refers to early forced weanings as emotionally traumatic for the baby and states that most weaning recommendations given by pediatricians are "based on personal feelings and prejudices and not medical documentation." In her words: "Suddenly and prematurely taking from a baby the most emotionally satisfying experience he his ever known could . . . lead to significant immediate and long-term distress.... Such an approach considers breastfeeding only as a source of milk and fails to understand its significance as a means of comfort, pleasure, and communication for both mother and baby." Well said! Yet Waletzky's paper is based on her impressions from her psychiatric practice, not on research.

Research reports on the psychological aspects of nursing are scarce. One study that dealt specifically with babies nursed longer than a year showed a significant link between the duration of nursing and mothers' and teachers' ratings of social adjustment in six- to eight-year-old children (Ferguson et al, 1987). In the words of the researchers, "There are statistically significant tendencies for conduct disorder scores to decline with increasing duration of breastfeeding." The authors were cautious in their interpretation of the results, saying that they did not control for differences in mother-child interaction between breastfeeders and bottle-feeders, which could account for the differences they saw in later social adjustment. But it makes no real difference whether the improvement in later child behavior is due to breastfeeding per se, or the maternal behaviors that are typical of women who are open to nursing their babies for a year or more. The outcome is what matters; the children who nursed the longest were perceived later to be those with the best social adjustment. The link between duration of breastfeeding and social adjustment was stronger and more consistent when the children's behavior was rated by mothers rather than by teachers (although for both rating groups the association was significant), suggesting that mothers who breastfeed for longer periods may tend to view their children in a more positive light than mothers who do not.

I think most of us would agree that breastfeeding helps us to react to our children in a more positive way. It helps us to feel close and loving, which can be especially helpful in weathering the irrational demands and emotional upheavals of toddlers. No matter how tense I feel when I sit down to nurse my youngest child, almost invariably we both get up feeling relaxed and cheerful.

Now, before listening to breastfeeding advice from Kim, I would hit up the La Lech League website first, or Kellymom.
Thanks Kimmy, but stick to fashion advice (or whatever it is that you do)
Posted by Wendy Maduro at 2:48 PM