The difference between regret and guilt 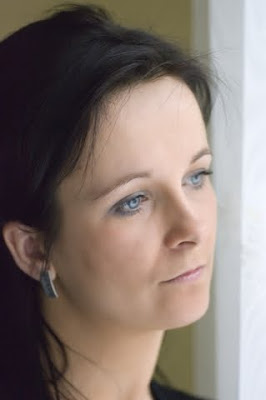 Is there really a difference between regret and guilt?

Do these emotions even serve a purpose to us as humans? Or are they only present to bring us down?

I ponder these questions a lot, especially when it comes to decisions we face and make as parents.
I feel regret over a lot of decisions I've made in connection with my pregnancy, labor and breastfeeding relationship. There were many things I could've handled differently that would have had a major difference in outcome. One big one is how I handled my daughter's waning interest in breastfeeding. I feel regret over not handling it properly which ultimately caused her weaning before we were truly ready for it. Yes, it's normal even good to feel regret. But do I let feelings of guilt eat me up? No, absolutely not.

That's where I draw the line. Although I think that feelings of regret are very fitting, feelings of guilt really aren't. Guilt is something consuming, that can potentially eat a person up inside if left unchecked. Guilt can beat a mother to the ground, especially if she is already unsure of herself and her mothering abilities.

I asked on my Facebook & Twitter what people thought of a mother feeling regret or guilt because of not breastfeeding ; 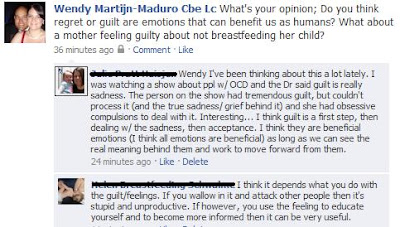 
Main Entry: guilt
Pronunciation: \ˈgilt\
Function: noun
Etymology: Middle English, delinquency, guilt, from Old English gylt delinquency
Date: before 12th century
1 : the fact of having committed a breach of conduct especially violating law and involving a penalty; broadly : guilty conduct
2 a : the state of one who has committed an offense especially consciously b : feelings of culpability especially for imagined offenses or from a sense of inadequacy : self-reproach3 : a feeling of culpability for offenses

1. To feel sorry, disappointed, or distressed about.
2. To remember with a feeling of loss or sorrow; mourn.
v.intr.

1. A sense of loss and longing for someone or something gone.
2. A feeling of disappointment or distress about something that one wishes could be different.
3. regrets A courteous expression of regret, especially at having to decline an invitation.
When it comes to breastfeeding and the internet, the word "Guilt" comes up a lot. Mothers blaming other mothers for making them feel guilty about a choice they've made or a circumstance they had no control over.
I think the words we use can have a tremendous affect on others, and like time, hurtful words once said, cannot be taken back.

The difference between guilt and regret in my opinion, means the difference between feeling beaten down, and feeling motivated. When a mother feels regret over a decision she made (whether it was informed or not), those feelings can motivate her not to repeat those actions should she find herself in the same situation in the future. Regret can also make people activists for a cause. I feel regret over losing my breastfeeding relationship and this motivates me to help mothers and their families make good choices, choices that they won't have to regret in the future. Guilt, on the other hand, just makes me feel worthless, reminding me that I can never get back what I gave up.

Some think that regret is bad. It isn't, it really isn't. It is completely appropriate if a mother feels regret over something she feels she should have or could have done differently. I think that we as caregivers, can lend a listening ear, and just acknowledge what she feels, instead of telling her how not to feel, she could feel better.

As fitting as feelings of regret are, we can warn mothers about letting these feelings turn into guilt. Guilt that can sap their energy and consume their every waking thought. This is counterproductive.


So.. I agree with all the ladies above, these feelings can serve a purpose, only if we control them for the better, and not let them control us for the worse.