Why Ellevill's models make me want to buy their wraps

Ever since seeing the Ellevill wrap giveaway on Marvelous Kiddo, I have been practically obsessed with this brand I'd never heard of. As many of my friends and readers already know, I am obsessed with baby carries, in particular, wraps.

As I perused through Ellevill's website, not only did the plethora of colors and the sensations of textures jump out at me, what I especially noticed were the models and their chosen surroundings. Unlike the wrap/sling modeling mannequin, Ellevill's models are beautifully made up, and most wear heels and exceptionally trendy outfits. Their fantasy filled scenarios simply complement their luscious looking wraps and make you want to snatch them up even quicker. Their photo shoot scenes have inspired me to jazz up my carrier shoots as well. Take a look at some of my favorite shots. 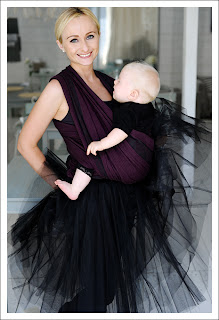 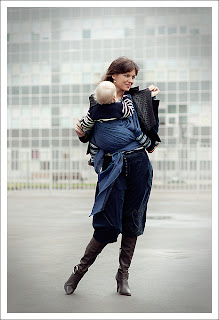 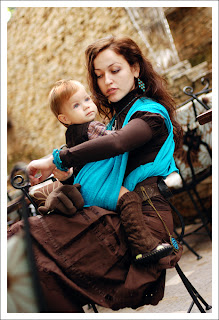 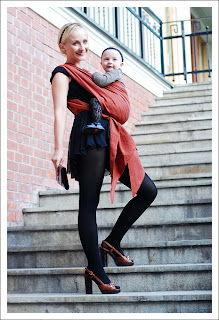 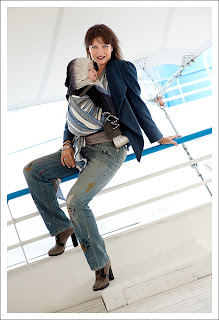 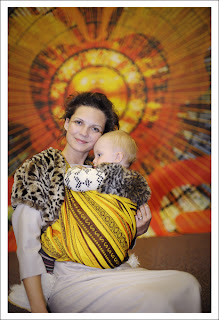 I like how the models and the scenes are very unusual and the fashion is pronounced. It just makes their wraps bolder and makes the colors pop

The only critique that came up in my mind as I browsed their selection was the fact that there was no ethnic diversity in their moms & babies. There were also zero nursing pictures. Besides these points, I found no qualms with Ellevill.

The post I don't want to write and that no one wants to read, hear or talk about 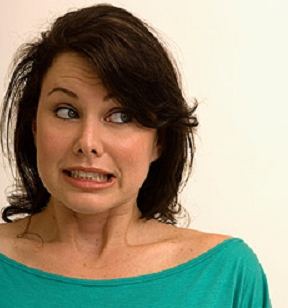 Before you think I'm pregnant, pause a second and read.

No, I'm not pregnant.


Hello. My name is Wendy. I am a 22-year-old divorced mother of one. Sheesh


I have become a single parent for the second time around. There, I said it. There are things in my life that I do keep private, such as the reason for me divorcing my husband of just 1,5 years (who is not the father of my child.) What I rather discuss are the implications it will have for me and my daughter. As many of my readers already know, I have already been a single parent at the beginning of my daughter's life, and although those were some tough times, it taught me to be proud of being a strong woman not co-dependent of a male for happiness.

I was a young barely teen mom (19 years to be exact). I birthed my daughter vaginally and breastfed her for over a year while working full-time. Although having a child at a very young age isn't a good choice, it doesn't mean that the outcome must be negative. I pride myself on turning my life around and making a success out of a bad situation.

Then, the cherry on the cake was when despite all odds, I married a wonderful man. Well, things obviously didn't turn out so wonderful after all and once again I find myself in the single-parent boat ( me and Single Dad Laughing should start a forum X_X )

I don't doubt my capability and ability to raise my daughter on my own. I know it's not the easiest task on earth, but I do know for a certainty that it is the most rewarding. I can only hope things work out in the future. No matter what reason there is for a divorce, whether it is necessary or not, they will remain painful. I'm grateful for the support and understanding I got from my family ( from parents married only once and for nearly 30 years!) and for those who dropped me like a dirty sock because of not knowing the details behind the divorce and assuming the worst, I say, so be it ( what did Eminem say to Debbie in his track'Without me' ? )

I'm a young, energetic 22-year-old with a lot on her plate, I wonder what's next for me, maybe retirement at 35, and menopause at 40?

Posted by Wendy Maduro at 10:52 AM No comments: Links to this post

Are you a Babywearer? How Long have you been carrying your baby/child?

Babywearing is an art. Once you find the right carrier for you and your little one, it's hard to let go, even when you know your personal journey has reached it's completion until the next little one (for some this means waiting on grand-kids!) comes along.

Some see babywearing as merely a cultural difference, some see it as a step backwards, and some understand the benefits and strive to teach others about it by word and example. I know by experience that once you start babywearing, and get to know all the carriers there are out there on the market, it can become almost like an obsession, with the carriers that is. I've been wearing my daughter for about 2 years now. Planned on wearing her from birth onward, but bought a crotch-dangling Bjorn, and quickly gave up the idea when she hit 12-15 lbs. I simply could not bear the pain the straps caused me and thought all carriers were alike. Well, they're not. At well over 30 pounds, I still carry my 3-year-old daughter comfortably with a wrap and mei tai, and for short periods, a pouch or ring sling.

Babywearing is slowly but surely gaining speed in Aruba and I'm sure it will explode very soon. More and more mainstream baby stores are selling pouch slings and mei tais, exposing more parents to at least the thought of carrying their child instead of pushing it in a stroller or dragging it in a carseat. My hope is to see more slings than strollers on the street. Many parents carry their children in their arms, why not use a sling then? It's much easier..

In conclusion, no matter what is said or done, no one can or will completely eradicate babywearing. The CPSC can issue as many warnings as they'd like (for the actual dangerous carriers, but it ended up pitting most mainstream parents against all carriers), anti-babywearing/attachment parenting advocates can spread lies about wearing your child, but the fact will always remain, babies were meant to be held close.

Posted by Wendy Maduro at 11:13 AM No comments: Links to this post 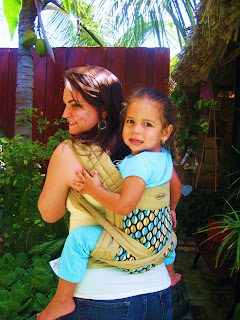 I'm starting a series of posts reviewing all the carriers I have in stock and those I'll receive in the future. This is to aid Aruban parents in choosing the right carrier for them, allowing them open access to the negative and positive points of a carrier while simultaneously giving them the opportunity to rent these same carriers out.

Today's review will look at the Infantino Wrap & Tie.


Because of the introduction and subsequent recall of the Infantino Sling Riders, I was very cautious about this brand. Especially since they also mass manufacture The Comfort Rider, Cozy Rider and Easy Rider (all Crotch-Dangling carriers, as my dear friend on Twitter calls them), I was weary about the efficacy, and ease of this mei tai style carrier.

This carrier is named a wrap and tie, but it adheres to the genre of soft structured carriers named Mei Tais. Mei - to carry on the shoulders/ tai - belt; band/bring.  Traditionally, the Chinese mei tai was a square or nearly square piece of cloth with parallel unpadded straps emerging from the sides of each corner.


Mei tais can be used from birth ( most manufacturers recommend 8 .lbs)  onward, up to 35 lbs. The versatility and relative ease of a Mei Tai is what makes this a carrier that many love. It's more supportive than a one shoulder carrier, but not as difficult to learn to tie as a wrap. It distributes the weight across both shoulders and the waist, which makes for carrying a heavier child, more comfortable.


What I liked/disliked about Infantino's Wrap and Tie 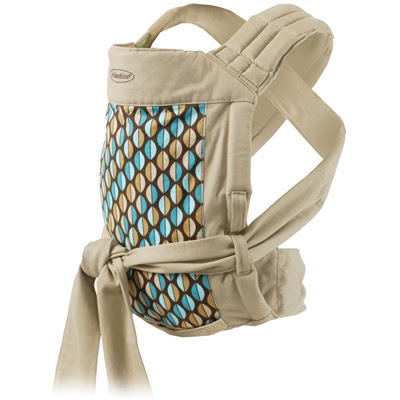 Negative Points
All in all, I am very pleased with the purchase of this carrier and I can feel comfortable to say that CariBirth is officially renting Infantino's Wrap and Tie out to those interested.
For more information on babywearing, or sling rentals feel free to email me at info [AT] caribirth [DOT] com
Posted by Wendy Maduro at 11:11 AM 3 comments: Links to this post

Book Review : Birth Movement: How To Use the Birth Sling, Squat Bar, Birth Ball, and Positions for Your No-to-low Intervention Hospital Birth 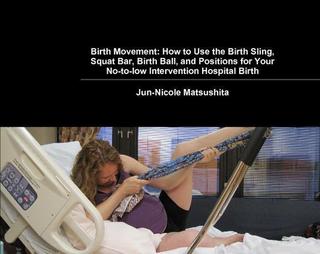 I am very pleased to announce that I have received my first (E)Book to review and share with you all! A fellow Childbirth International Alumni, Jun-Nicole Matsushita (CLD) has written and published a beautifully illustrated book on making your hospital birth no-to-low-intervention as possible by means of a birth ball, birth sling and squat bar.

Its title is most fitting "Birth Movement: How To Use the Birth Sling, Squat Bar, Birth Ball, and Positions for Your No-to-low Intervention Hospital Birth"

I perused through the Ebook pages and am eager to sit down and read it on my baby, The Kindle.

Expect the review up next week
Posted by Wendy Maduro at 8:52 AM No comments: Links to this post

In Choosing Coke or Juice...

I can't say I was totally surprised, but last night I was drinking some delicious Tropicana Strawberry Melon Juice and I turned it around to see how much sugar and calories I was pumping into my system when I nearly fell on the floor.

I thought to myself, why on earth am I choosing juice over soda if I'm putting as many calories and as much sugar into my body anyway? 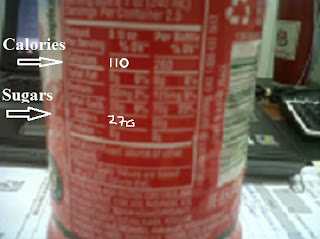 Don't believe that just because it's "juice" it's automatically healthy.... Choose your beverages responsibly
Posted by Wendy Maduro at 11:12 AM No comments: Links to this post