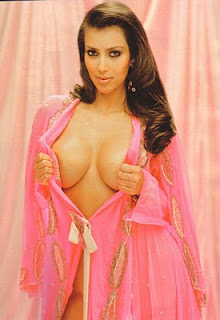 Dear Kim, poor little Kim, Why did you Tweet that?

And you keep making it worse by shoving the foot in your mouth further and further down...

This morning I awoke to a tweet that said


"EWW Im at lunch,the woman at the table next 2 me is breast feeding her baby w no coverup then puts baby on the table and changes her diaper"

Yes Kim, changing a baby at the table IS unsanitary, but what is this, wait, Kim Kardashian, a young woman with a sex tape and a very nude, breast exposing photoshoot in Playboy is telling women that nursing without a cover is wrong?!

Wait. It gets better.

She then tries to somehow mitigate the situation, not really, by tweeting this;

"My sister breast feeds! Its a natural beautiful thing, there's nothing wrong w it, but she covers herself, not w her boobs exposed"

Oh Kim, by the first tweet you should have stopped. Now you have about, mmm, let's say, a billion tweets by  outraged lactvists with your name or a hashtag resembling #KimKisagainstbfing.

I find it absolutely comical that a woman with a show such as hers, that promotes the showing of breasts (and more) finds it offensive when a mother breastfeeds without a cover... but then again, oh right, these two things I have sitting in my bra aren't meant to be seen with a child attached to them. Silly me. Moving on.

Kim, Kimberly, I think it's time you wake up and smell the coffee. If prancing around exposing your breasts and cleavage to the whole world is acceptable to you, but nursing without a cover isn't, you gotta get your priorities in order.

I hope she apologizes, if not, well, for that one second that I read her tweet and found it ridiculous, I wasted my time.