Why breastfeed in public

A friend of mine had glossed over a study she had read about primates not knowing how to suckle their young if they had never been around other primate mothers suckling their young before they gave birth. I went on a search for that study because, quite frankly, I think its truth extends into the human family too.

It says in part ;


Primates are, generally speaking, an exception to the general rule of easy nursing. A study of infant-mother long-tailed macaque monkeys showed that they use the same oral nursing motions as other mammals (i.e., suction - German et al., 1992). Yet most primates appear to require a period of leaning in order to successfully nurse their offspring as compared to other mammals (Smith, 2005). Hrdy (1999) has proposed that this learning may be a trade-off between the reliability of innate behaviors and the flexible power of a learning brain. Data from isolated primates provide evidence that without observing or experience nursing, monkeys face a strong likelyhood of failing to nurse succesfully (Abello & Fernandez, 2003 ;  Harlow & Harlow, 1962)

This could well explain why today women just don't 'know' anymore about breastfeeding. The reason for the majority of doubt amidst new mothers' ability to nurse their young is partly to blame on never having been 'exposed' to it when they were young, growing up, or on a daily basis. You know how when you hear a story, and over some years of not having heard it anymore, you tend to forget bits if not, whole chunks of the story. Although breastfeeding is natural, and instinctual, because of it fading into the minority, it has become 'instructional'. We need books, workshops, seminars, classes, and not to mention support groups. 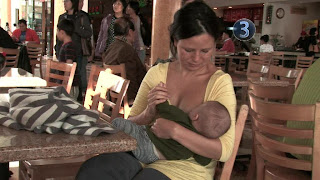 So what should breastfeeding mothers do? Just what a lot of people object to. Nurse in Public. Anywhere, anytime. You'll be doing other young women, children, mothers to be, a big favor
Posted by Wendy Maduro at 12:10 PM