The ubiquitous fear of spoiling your baby by holding/wearing them 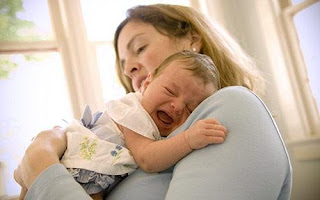 It seems that lately, (well not really lately, but more than usual) I've been hearing so many concerns being voiced about a baby or toddler that is worn in a sling or held in the arms of a caregiver and spoiling them because of this. I can talk myself blue in the face, but this viewpoint is so deeply ingrained in people's minds that even those who wish to practice attachment parenting are doubting themselves if it truly is the right way to rear a child. I can sit here all day and night writing until I stare carpal tunnel straight in the face, but it's not my place to say, do this that way and that this way... I just want to offer clarification about a widely held myth that is so pervasive that is has even the most dedicated baby wearing parents sometimes slightly doubtful

The almost intrinsic fear of spoiling an infant by holding, rocking, soothing, or wearing them in a sling
The concern about spoiling one's offspring is not new. I mean, which parent purposely wants to raise a child who will turn out to be the biggest source of stress for them? No one right? But are we secretly doing so by the parenting strategies our parents and even some grandparents have used? Are we unwittingly turning our children into uncontrollable monsters because of this lack of holding or meeting our babies' needs? Can a parent or caregiver really spoil a child with love?

I asked on my Facebook what were people's opinions on responding right away to a baby's cry, here's what they said :


In her article on Attachment Parenting, Julie Renee Holland, shows us that " you can't spoil a very young baby. Babies under 6 months are just not capable of the reasoning involved in being spoiled". She asserts that "babies who are held enough to meet their emotional and physical needs will start to get down and move around on their own as soon as they are able to do so. Content, curious and alert, the held baby soon sees that there are things going on down there that they want to check out. This is a normal part of their development and holding them will not disrupt their natural urge to explore unless you don't let them down when they decide they are ready." This can be compared to a baby that is in it's mothers womb. The baby knows when it is has reached it's correct gestational age and when mother's body is ready for labor. In rare instances, complications arise on their own (as occuring in a completely natural drug/intervention free birth) in which the mother cannot give birth naturally.. of course, the exception is not the norm. The same goes for a baby, developmentally speaking, who knows when he's ready to start exploring. Some babies start young, and others take longer. This happens, regardless of the fact whether the baby was carried or 'worn' a lot or not.


consistently making light of a child’s discomfort, (big boys don’t cry) (don’t be a cry baby), trying to distract a crying baby with food, or getting annoyed, can be eventually interpreted as rejection. Eventually, the child learns to keep their feelings to themselves, fearing ridicule, teasing, or upsetting the parent. They can also learn such troublesome core beliefs such as “I am not worthy of Love" "

Putting the "possible delay of developmental milestones due to constant carrying", we'll go on to our main thought and question, that of, can a parent/caregiver really spoil a baby by holding it whenever it cries?While I am certain that parents can spoil their children, this does not happen during the period of infancy. I want to see anyone try and reason with a two week old about when it is time to be sleep and when it isn't. It's just impossible. So, why do you think you can spoil your child, "surrendering" to him, by holding and cradling him in your arms against the warmth of your body and the beating of your heart?

In another article, Krissana Jeffery shows us that "Since the time of Dr Spock, parents were taught to not always answer their child’s cry for comfort, for fear of spoiling them. Many parents (now grandparents) took this advice very seriously. They didn’t realize, that how we respond to their cues for comforting, will influence how they feel about themselves and relate to other people in their future. Parents were led to believe that continual comforting could be spoiling. But there is a vast difference that begs to be recognized.

According to pediatrician, Dr.Meriam Rossi, research has shown that how consistently you comfort your baby when sick, upset, or hurt, especially in the first year, is extremely important. By responding to your child’s cues for comfort with acceptance and loving gestures, your child will soon learn to calm and comfort itself. (the payoff!)" 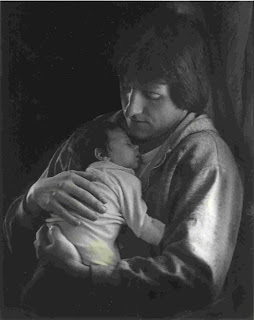 consistently making light of a child’s discomfort, (big boys don’t cry) (don’t be a cry baby), trying to distract a crying baby with food, or getting annoyed, can be eventually interpreted as rejection. Eventually, the child learns to keep their feelings to themselves, fearing ridicule, teasing, or upsetting the parent. They can also learn such troublesome core beliefs such as “I am not worthy of Love" "

In yet another article, Amy Weekley drives the point straight home.

Many parents believe that allowing a baby to "cry it out" will foster independence. They believe that attending to a baby's every cry will teach the baby that crying will always get him what he wants, and he will become spoiled. But what these parents fail to realize is that babies are not meant to be independent at such a young age. They are naturally designed to be dependent on their parents, as are babies of all mammal species. They cannot change their own diapers, prepare their own food, get their own toys, or even move their own bodies very far without help from their parents. Allowing a baby to cry unnecessarily doesn't teach him to be independent, because by nature he is incapable of independence - it instead teaches him that his cries are not important, and that he must learn to do without the things he needs. In contrast, responding to a baby's cries teaches him that his cries are a powerful communication tool, that his parents are listening when he needs something, and that his needs are important.

Babies have a real need for physical affection. Infants who are not touched can actually die, which indicates that snuggling and touching are not simply small acts of love to be doled out sparingly, but are instead vital to a baby's health and well-being. Touch helps to aid a baby's emotional development and relieves stress. Some studies suggest that frequent touch results in more rapid brain growth, stronger immune systems, more independence later in life (as well as less fear), and more rapid motor development. Babies who are touched frequently also tend to sleep better and fuss less than babies who are not. Babywearing fills this need for human touch in a way that would be difficult to achieve otherwise. Being carried close to a parent's body simulates the warm security of the womb, which can help the baby feel less stressed and more at ease. This comfort enables the baby to focus his energies toward growing and learning, rather than trying to find ways to soothe himself. Babywearing does not, as some believe, spoil a baby or condition him to want to be held all the time. A baby who is worn does not automatically grow into a clingy toddler. In fact, studies show that the opposite may be true. A baby who is worn through his infancy may be more likely to show a healthy independence as he grows older. Because he has been given that extra security of knowing that his parents are always there if he needs them, he is more able to strike out on his own and try new things. He does not have to be clingy, because he has no fear of abandonment.


I would like to present one more argument to why we should respond to our babies' cries. Take a good look at our anatomy and some physiological processes. We'll take for example, a lactating mother. When a mother decides to breastfeed, especially during the first weeks ( but can go on for months and months and months) when she hears her baby's cry, her milk starts to flow uncontrollably. This is an oxytocic response in the mother's endocrine system. Obviously hearing the baby's cry, possibly for milk, the body knows right away to stimulate the let-down reflex and keep the milk on coming! This is a completely uncontrollable physiological and psychological response to a need being voiced on the baby's part. This shows us, that we were designed, our bodies we designed to respond to the baby's cues, be it for nutrition or simply for solace. Why do we then work against that intrinsic urge and automatic response and actually convince ourselves that 'it's not for the good of the child, let me let him cry it out a bit and see...'. If you are the parent of a young infant, or even a toddler, why not try a different approach to the "cry it-out" system. Try addressing your infants needs right away and meet them. It does take time and sometimes considerable efforts, but if the results are a happier more secure and independent child, isn't it worth while?