Seashells - Do WHAT with them? 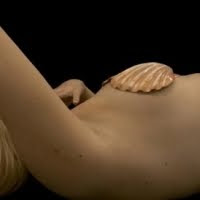 I knew that I wanted to breastfeed my baby, but I wondered if the lactation consultants, educational sites, instructional videos, La Leche league, and the rest of the somewhat overwhelming array of resources were necessary. After all, breastfeeding is ancient and totally natural. Wouldn't my body and my baby tell me what to do? This proved to be my first-time mother's enthusiastically naive perspective. After my son's birth, when the reality of the endeavour presented itself, I found myself shocked to actually need several meetings with a lactation consultant, much online research, and advice from friends. Eventually, I cobbled together a body of knowledge and techniques to successfully feed my newborn the time-honored, natural way.
There is no substitute for learning proper latching and baby-holding techniques from an expert, but the most surprising, breast-saving tip for the first few months was to place seashells on my nipples between feedings. Seashells? The idea captivated my imagination—after all, if we are gifted with a more voluptuous postpartum figure, isn't it fitting to wear Botticelli's Venus' undergarments? I liked the notion of having this potent feminine energy from the ocean and the tides at my breasts.

The suggestion came from my very modern, logical, Swedish, friend, Annika Granholm, who swore that seashells saved her aching, cracked, and bleeding nipples. Annika admitted her own initial resistance to such a non-Western remedy had prevented her from heeding a friend's advice for several months—until she was on the verge of quitting breastfeeding altogether and compromising her commitment to attachment parenting. While word-of-mouth had failed to persuade her, mounting physical pain and a Swedish midwife eventually did. In fact, in Scandinavia you can buy natural seashells from maternity shops, online, and at midwifery centers.

Patella vulgata shells have been worn by Norwegian, Danish, and Swedish mothers for thousands of years. These valuable limpets exist from the Arctic Circle in the north to Portugal in the south and can be found on all coasts of Great Britain and Ireland. The shells are an ancient remedy for nipple sores, ranging from splits and cracks, to bleeding and blisters. According to a Swedish online site that sells the shells, they create a soothing microclimate so that nipples soften and are moisturized by breastmilk—which contains lactoferrin—known for its antiviral and antibacterial healing properties. It is advised to air-dry the area prior to applying the shells and to boil them between uses if treating any infection or open sores.

Most seashells are made of calcite or calcium carbonate (CaCO3), also the primary mineral component in cave formations. Metaphysical uses for calcite, determined by its color variations, include recuperation, relaxation, energy enhancement, and emotional uplift. Calcite is credited with calming fears by soothing the psyche, as well as with helping a person to let go of emotional stress. It is said to expand our capacity to freely give and receive love, aid during transition, integrate the new into the physical plane, and ensure that power is properly used. Fortunately, most shells contain a rainbow spectrum of calcite, and although I was an amateur mom, intuitively I just knew that all of these qualities would be beneficial to mothering.

Walking along the beach in Jupiter, Florida, my partner and I handpicked a variety of native shells. We found Alternate Tellin, Buttercup Lucine, and Atlantic Surf Clam varieties that all proved suitable for protecting tender nipples. We selected only those with similar shapes and sizes to my breast anatomy. These local shells seemed to be custom-made by Mother Nature herself as they were as comfortable as a second skin and provided many additional benefits beyond preventing sores. They also served as a barrier for my highly tender areolas and nipples while I adapted to my baby's near-constant suckling. They were an oceanic armor against chafing from clothing. Unexpectedly, they also helped rebuild my self-esteem by bringing me a feeling of empowerment: wearing the seashells was like channeling the strength of the Earth Mother, which enabled me to embrace my new and divinely feminine role as a giver and sustainer of life.
Posted by Wendy Maduro at 11:58 AM