The image of a sleeping infant personifies tranquility and serenity. Most parents have experienced that unique sense of happiness when they gaze into the face of their sleeping infant. The advertising industry certainly has capitalized on this image, using phrases like "sleep like a baby."
But what does it mean to sleep like a baby? Does an infant stay in these peaceful positions throughout the night? What happens when nobody is watching? Does being alone make a difference? These were some of the questions prompting a study of mother-infant sleep behaviors in solitary and bedsharing conditions.1
The study used the same mother-infant pairs as those used in the original bedsharing study conducted for the National Institute of Child Health and Human Development.2,3 That original study looked specifically at the physiological aspects of infants in solitary and bedsharing conditions; our study focused only on the social and behavioral aspects of solitary and bedsharing mother-infant pairs.
During the behavioral portion of the study, we explored and compared sleep behaviors of routinely solitary and bedsharing mother-infant pairs under both solitary and bedsharing conditions. The observations were made from videotaped recordings, over a three-night span, of nocturnal sleep behaviors and sounds from the mother-infant pairs in solitary and bedsharing conditions.
Significant differences were observed between infants placed in solitary versus bedsharing conditions in the sleep laboratory. Infants in solitary night conditions were more restless (see Figure 1). They revealed continuous large and small limb movements (e.g., arms extended, legs kicking, back arching, full-body stretching), often accompanied by repetitive side-to-side head rotations. This physical activity tended to be clustered, with infants in solitary conditions exhibiting more prolonged bouts of activity than infants in bedsharing conditions, often followed by long periods of quiet sleep. Solitary infants experienced more full and prolonged physical arousals when separated from their mothers, due perhaps to the absence of soothing sensory stimulation that the mothers' presence provided. When aroused from their sleep, these infants remained aroused, possibly alarmed, most likely from the lack of the mothers' presence.
Bedsharing infants, in contrast, experienced a physically calmer and more soothing sleep, although transient arousals and short awakenings, measured by EEG recordings in the studies by Mosko et al., demonstrated that this calmness produced moderate physiological arousals, many of which were not necessarily visible.4
Our studies highlight a concern that constant moving throughout the night by solitary infants produces stress or fatigue. Sleep research on adults has found that increased levels of fatigue could increase deep stages of sleep, and studies have postulated that increased stages of deep sleep may be one potential risk factor for sudden infant death syndrome (SIDS).

Prolonged physical arousals occur as the infant senses the mother's absence (lack of warmth, physical touch, odors, and physiological sounds), and increased physical activity and a full awakening or crying may result. In fact, the most obvious differences between solitary and bedsharing infants included increased sounds from the infant (grunts, squeaks, and moans) (see Figure 2) and crying (see Figure 3). Crying is a very powerful attachment behavior that infants use to elicit care and proximity from a caregiver. Yet for most of the 20th century, experts admonished Western parents not to "spoil" infants by responding.5 Those opposed to bedsharing assumed sophisticated manipulative skills on the part of infants. Actually, their needs are basic: the warmth and security of being close to the caregiver.

On the other hand, crying evokes physiological responses that increase the production of stress hormones. Crying infants experience an increase in heart rate, body temperature, and blood pressure. These physiological reactions are likely to overheat the infant, and overheating is considered a potential factor in SIDS.6
Most psychologists agree that physical contact between infants and parents creates reassurance that will make children more secure in life.7 A large amount of research has confirmed the importance of developing a healthy and secure attachment between infant and parent in the waking hours. Our studies indicate that attachment as a behavioral system operates 24 hours per day and does not deactivate during sleep, where infants spend up to 60 percent of their time.
The most striking difference that we observed between solitary and bedsharing infants was the frequency of sleep startles. These startles were short, spontaneous contractions of limb and trunk muscles that looked like vigorous thrashings of the extremities and a curvature of the spine, followed by a deep breath and a sigh. This cannot be a pleasant event. In most cases, startles were observed only in solitary infants, and rarely during bedsharing (see Figure 4).

The study of infant startles is relatively recent, and examining their occurrence in different conditions, such as solitary and bedsharing conditions, has assumed special importance. Researchers first assumed startles were needed to arouse an infant beginning to experience respiratory distress.8 However, these studies observed only infants in solitary conditions. It is equally possible that the mother's presence during bedsharing has soothing effects that moderate the occurrence or need for startles, or that arousals induced by the mother are sufficient for the infant.
Our study also observed that maternal behavior differed in solitary and bedsharing conditions. Mothers were more likely to respond to aroused infants in solitary conditions with intense soothing, such as rocking, bouncing, or walking. Soothing behavior of this type is necessary to calm the infant from heightened arousal, which supports our theory that infants in solitary conditions were more distressed than infants in bedsharing conditions. In contrast, bedsharing mothers were more likely to engage in affectionate behavior with their infants. The soothing effect kept infants calmer throughout the night, resulting in infants who were less physically active but more physiologically aroused, as measured by EEG. 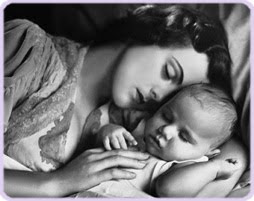 One behavior not observed in our study was the one so feared by opponents of bedsharing-the overlying of the infant by the mother. In more than 1,000 hours of observing 40 mother- infant pairs, no mother was ever even remotely close to overlying or suffocating her infant. Instead, maternal and infant behaviors were beautifully synchronized-when one moved, the other responded, without fully awakening.
There has been much written in the press about the dangers of bedsharing. As early as 1993, the Consumer Product Safety Commission (CPSC) released a report on infant suffocation and its increased danger in bedsharing.9 Recommendations were made against cosleeping and bedsharing from a retroactive analysis of infant deaths on death certificates. The report neglected to include scientific information about or discussion of the benefits of safe bedsharing practices, and it did not identify the dangers present when infants sleep in solitary conditions. Retroactive analysis of death certificates is problematic, as descriptions of an infant's alleged suffocation were anecdotal accounts of what may have occurred. The CPSC report also failed to address relevant and important issues relating to the environment of sleep, who was present, and the parent's motivation to bedshare. Many childcare experts believe that once an infant is allowed to sleep in the parental bed, he or she will experience increased night awakenings and bedtime protests if the parent is not present. According to this argument, the pathological dependence on parents creates an impediment to the development of necessary movement toward autonomy and independence. In fact, no research exists to substantiate these claims. Studies have demonstrated that bedsharing is associated with family nurturance, less use of transitional objects, flexibility in family structure, and parental reports of higher adaptive functioning on the part of the children.10 In a Massachusetts survey, bedsharing was found not to be as rare as previously reported and not related to standard behavior problems in children.11 Another study compared a group of psychiatric outpatients with a control group and found that bedsharing was not a predictor of outpatient status.12 A survey of military families found that bedsharing was associated with parental reports of better adaptive functioning and less psychiatric treatment.13

Of course, any surface on which an infant is placed can present dangers. Responsible parenting aimed at creating a safe environment, whether a solitary crib or a shared adult bed, is paramount. Advice to parents regarding sleeping arrangements should reflect all of the known advantages and disadvantages of bedsharing and solitary sleep conditions; it should be devoid of cultural biases and should focus on the infant's physical and psychological well-being.
Our study found fundamental differences between solitary and bedsharing conditions. The differences in infant sounds, physical activity, startles, and maternal soothing techniques all indicate that bedsharing provides a calmer and more soothing environment for the infant, and probably for the mother, too. When we look at the angelic face of a sleeping infant in photos and advertising, we should remember that the infant is probably not sleeping alone.

Miranda Barone, PhD, is a psychologist who currently teaches at California State University, Long Beach. She lives with her husband, Peter, and their two teenaged sons, Matthew and David, in Southern California.

Figure 1. Proportion of minutes with infant behaviors, including continuous large limb movement, small limb movement, and head rotations, on solitary nights (SN) and bedsharing nights (BN) for infants who routinely sleep in solitary (RS) or bedsharing (RB) environments at home. There were 13 mother-infant pairs in each group. Results obtained by M. Barone were based on data collected by observing videotaped recordings from the original research funded by NICHD, S. Mosko and J. McKenna, principal investigators.

Figure 2. Proportion of night's sleep with infant vocalization on solitary nights (SN) and bedsharing nights (BN) for infants who routinely sleep in solitary (RS) or bedsharing (RB) environments at home. Results obtained by M. Barone were based on data collected by observing videotaped recordings from the original research funded by NICHD, S. Mosko and J. McKenna, principal investigators.

Figure 3. Proportion of night's sleep with crying on solitary nights (SN) and bedsharing nights (BN) for infants who routinely sleep in solitary (RS) or bedsharing (RB) environments at home. Results obtained by M. Barone were based on data collected by observing videotaped recordings from the original research funded by NICHD, S. Mosko and J. McKenna, principal investigators.

Figure 4. Proportion of night's sleep with startles on solitary nights (SN) and bedsharing nights (BN) for infants who routinely sleep in solitary (RS) or bedsharing (RB) environments at home. Results obtained by M. Barone were based on data collected by observing videotaped recordings from the original research funded by NICHD, S. Mosko and J. McKenna, principal investigators.
Posted by Wendy Maduro at 6:16 AM