The other day, I had a consult with a mother in the hospital about some breastfeeding issues. It turned into a double consult seeing how the mom's neighbor in the room was also having difficulties getting her baby to nurse. I sat there, and before, during, and after changing positions, giving tips, and explaining some stuff, I repeated many many times, continually emphasizing skin-to-skin contact with the baby in question. I've been almost obsessively carrying around the breastfeeding book entitled Ina May's Guide to Breastfeeding. I'd suggest anyone who's planning on breastfeeding, or is breastfeeding, or who is a breastfeeding advocate to pick up this book. Chocked full of reliable evidence based care information, it also sheds much light on Kangaroo care, as skin-to-skin contact is referred to. Let's look deeper into the points Ina May brings out.

Kangaroo care was first developed in Bogota Colombia as a low-tech method of care to stabilize premature babies through early and prolonged skin-to-skin contact in a position resembling that of a kangaroo and its offspring. The method was initially promoted because of its cost-effectiveness, but subsequent research has shown that it is equally effective in countries with plenty of resources.(1)

Uninterrupted kangaroo care is extremely beneficial and not to be overlooked immediately after birth. Unfortunately it is the norm for the mother to hold her baby for just a few minutes before having the baby whisked away to be weighed, measured, and given its first bath. All these procedures which many seem to think should take precedence over mother and baby first bonding, are actually in effect not necessary in a normal and uneventful vaginal birth, that must take place the minute the baby's born and its cord has been clamped and cut because the baby's weight and height will not change during the first hour of life. As Ina May points out in her book, it is actually very feasible to have the baby examined right there being face down on your chest or abdomen seeing how the initial evaluation or Apgar test is an observation of the baby's breathing rate, heart rate, muscle tone, reflex irritability, and skin color. If done this way, the examination needn't upset your baby by being rushed off into a setting that is unfamiliar, cold, bright and often times devoid of emotions.

Why is it so important that a mother and baby not be disturbed if at all possible right after birth? If we look at other mammals and studies which observed the sensitive period immediately following birth we can learn a lot. "General findings have been that later separation of mother and young could be tolerated, that is, long lasting bonds had been formed, as long as the separation did not occur during the sensitive period just after birth. However, in sheep, if the separation occurred just after birth and extended for four hours or so, half of the ewes (female sheep) simply wouldn't take care of their babies when they were reunited. In another study, when ewes were given epidurals in labor, they refused to take care of their lambs at all". As humans though, we are much more adaptable than sheep, goats and rats, but seek to understand the principle behind the comparison as to how important it is to keep mother and baby together if at all possible.

When you were younger, has your family ever had a dog or a cat? When they have a litter, it is crucial not to touch any of them too soon after birth, especially with dogs,  because if the mother dog/cat senses or smells that the offspring has been "contaminated" with human smell or any smell other than her own, they may reject or even eat their pups or whole litter. This reminds us how easily any maternal behavior could be disrupted by well meaning but ignorant human interference. To elaborate more on the importance of the "smell factor" Ina May goes on to say : "As for bathing (usually a routine hospital procedure just after birth), babies aren't born filthy. Blood, if present, may be gently wiped away, but the rest of what's on the baby's skin in conducive to the early initiation of breastfeeding, because the smell of the amniotic fluid is an important stimulant to the nervous system of both mother and newborn. The same principle should be applied to any attempt on the part of the nursing staff to wash your breasts. Two studies, prompted by scientists' awareness of the tendency  for newborn mamals to find the smell of amniotic fluid attractive, considered the issue of smell in human infants. In one study, mothers and babies were kept together, and the mothers washed one of their breasts. More than seventy percent of the babies moved towards the unwashed breast (2). Another study separated babies from their mothers and placed them in a cot with a breast pad carrying their mothers' odor a few inches away from their nose. The same babies were also given a clean breast pad. Not suprisingly, most of the babies moved toward the pad that smelled like their mother" (3).

The premature or emergency vaginal/cesarean baby 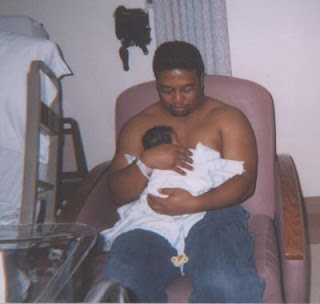 There are of course times when, unforeseen or even anticipated emergencies come up that make it near impossible for a mother to bond at length right after birth, such as in the cases of an emergency c/section or an extremely premature infant or if something went wrong during delivery and the baby or mother has to be transported to the intensive care unit. It is usually possible to have even a few minutes with the baby before he/she is transferred. If such a situations arises, after all is cared for and everyone is "stabilized", mom and baby should try and have as much skin-to-skin contact as is reasonably possible. As a matter of fact, premature babies receiving kangaroo care from their mothers regularly were twice as likely to breastfeed compared with babies in an incubator. Mothers who practiced kangaroo care with their premature infants produced more milk, and their babies cried less and maintained their body temperature better. The benefits of kangaroo care are not restricted to solely the mother. Fathers can provide much comfort and can bond better with his baby as opposed to just looking in from the outside of an incubator. It can be a bit daunting or frightening to hold such a small and fragile baby, but realizing the benefits to both parents and babies, I think love for the new addition can overcome any such fear of "breaking" the baby. Kangaroo care by both mom and dad help them to reconnect with their child and can empower them and make them feel like they do have an important part and are not just bystanders watching strangers caring for their newborns. Skin-to-skin contact may lessen feelings of guilt, anger, or disconnect and help the mother (or father) baby dyad/triad strengthen and fortify bonds for life.

If you or anyone you know, have given birth to a baby who had to stay in the hospital for whatever reason, be it for illness or prematurity, why not maintain good communication with the nurses caring for your baby. Although you may sometimes feel like you're "getting in their way", remember that this is your baby and that ultimately you have the last say in what goes. Unless contraindicated, kangaroo care poses no threat to your baby and is actually to be encouraged more. Speak to the nurses and health care staff and communicate your desires. If it has to reach thus far, show them the various studies conducted on the benefits of Kangaroo Care. By choosing the proper words and conveying your thoughts correctly and straight forwardly, there can be many possibilities, and your willing and firm but not disrespectful attitude may even elicit the nurses to extend more patience toward you and the baby. Never be afraid of honest and tactful communication.