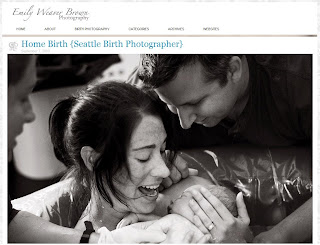 A topic of much heated debate is the one of birth at home. An option that I myself once considered to be for 'bush-people'. After the birth of my daughter, however, I started to see things in a different light. Even though I learned and heard about home birth in a favorabe light in my Childbirth education class, I couldn't help but think of how unsafe it was, or how 'olden-time' it is... little did I know...

I treasured the experience of childbirth so much that a few months after my daughter was born, at just 19 years of age, I decided to enroll in long distance training to certify as a Childbirth Educator. I loved it, I threw myself deep into the birthing world and as I grew and became more knowlegeable about the birthing process my thoughts and opinions surrounding home birth changed drastically as well. To begin with, I don't view midwives as 'bush-doctors' anymore nor do I view obstetricians as demi-gods either. When some people hear us talking about ob/gyns and birth some may conclude that us birth advocates are 'anti-obstetrician' but as Henci Goer put it, I'd like to think of it this way : " I believe the injudicious use of technology is doing considerable physical and psychological harm to mothers and babies."

A brief history of hospital birth


For years the American Academy of Obstetricians and Gynecologists have officially opposed home birth on grounds of safety. If the argument for universal hospitalization for childbirth is that it is safer, then it is reasonable to ask: Has moving birth into the hospital decreased the risks?

It all began in the 18th century when male midwives (equivalent to today's obstetricians) needed someone, anyone, to practice their skills in childbirth and began offering free hospital care for poor and sometimes homeless women. The first lying-in hospital was established in Dublin in 1745, which then spread to other parts of Europe and the U.S.

Doctors argue that the decrease in mortality and morbidity rate rates as moved into the hospital proves that the hospital is safer.(1)(2) Even if that statement were true, it would not mean hospital birth was responsible for the decline, but the claim is false. In the 1920s middle-class women began having babies in hospitals partly on grounds of safety. By the mid-1920s half of urban births took place there, and by 1939, half of all women and 75% of all urban women gave birth in hospitals. Even though the majority of birth took place at the hospital, maternal mortality did not drop below the 1915 levels of 63 maternal deaths per 10,000 births until the 1930s, when sulfa drugs and antibiotics to treat infection were introduced and more stringent controls were placed on obstetric practices. During that same time period, urban maternal mortality rates, where hospitalization for birth was more common, were considerably higher than overall rates: 74 deaths per 10,000 births (3). Infant deaths from birth injuries actually increased by 40%-50% between 1915 and 1929 (4).

Despite such progress in techniques and technology in the birth field, hospital birth is still not safer than home birth. Contemporary defenders of universal hospital confinement point to statistics showing higher perinatal mortality rates for out-of-hospital births (5)(6)(7), but these were raw statistics and included unintended home births and births without a trained birth attendant. No study has ever shown that planned home birth with a trained attendant who took proper precautions increased the incidence of poor outcomes among low-risk women compared with low-risk women in the hospital. The issue of the safety of home birth cannot be settled by research. While research has failed to show that home birth is dangerous, research cannot conclusively prove it to be safe. It comes down to a matter of individual choice.

Home births become dangerous only when doctors and hospitals fail to provide backup services, thus, their failure converts an imaginary risk into a real one (8)(9) which we all know results from lack of good communication and team-work which stems from the ob's often pompous attitude of always having to 'save their necks' (referring to the midwives).

From personal and others' experiences, the more I hear about births in our hospital ( yeah, any hospital for that fact) the more determination and resolve I have to birth my second and yet-to-be conceived baby at home. I cringe in horror when I hear of women's forceps or vacuum extraction deliveries, and I become more convinced to stay the heck out of a hospital in the perinatal period as much as possible.


"No study has ever shown that planned home birth with a trained attendant who took proper precautions increased the incidence of poor outcomes among low-risk women compared with low-risk women in the hospital."

In absolute random order, off the top of my head here is why I am having the next one at home with a capable midwife with expertise in home birth and a doula :

Some books on home birth