The introductory of Formula & Down Fall of Breastfeeding

I have often wondered when and how formula came into the making. And how Western Society came to be Anti-Breastfeeding ( including Aruba). A few nights ago, as I lay in my bed studying the book "Childbirth Education - Practice, Research and Theory" I stumbled upon the introductory of baby formula, and the down fall of breastfeeding. I thought, This is it! This is going in a blog! Every mother, expectant parents, breastfeeding moms and bottle feeding moms need to know the history of breast milk substitutes. Here it is 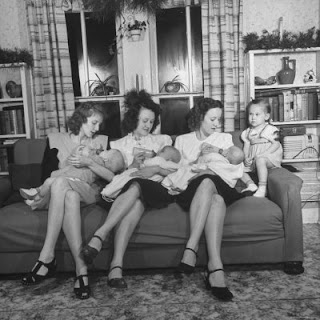 Historically, there has always been a concern about having an alternative available when, for whatever reason, human milk was unavailable. Wet nursing, goats' milk, and cows' milk were all used. Toolsie (1998), in a recent history of breastfeeding, relays that in 1891, the Walker-Gordon Milk Laboratory in Boston began distributing a modified, individulaized cow's milk formula for infant who were delivered to homes in Eastern cities of the United States, Canada, and London. Soon, however, many mothers began to mix their own human milk substitutes using the concentrated or dehydrated cows' milk products that had recently come onto the market. Neither health professionals nor 'Mother Nature' was able to monitor what infants were receiving. Toolsie goes on the report that by 1932, The American Medical Association (AMA) issued guidelines for infant food and declared that every infant breastfed or artificially fed should be under the supervision of a physician. The companies manufacturing "formula," as human milk substitutes were euphemastically named, cooperated by removing the instructions for mixing formulas from their products and leaving instructions in the hands of physicians. Thus, physicians became viewed as the experts on infant feeding and manufacturers of human milk substitutes formed a close alliance with them (Apple, 1980; Geer & Apple 1991)

With this increased acceptance of human milk substitutes as convenient and "scientific", breastfeeding rates began to steadily drop. Initiations rates in the United States reached an all-time low of 24.7% in 1971, with less than 10% of mothers continuing as long as 3 months (Martinez & Nalenzienski, 1979). 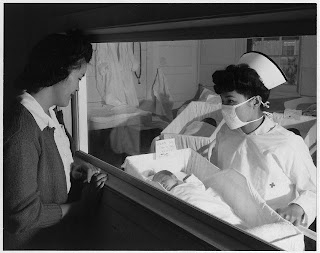 The Hopsital scene of the early 1960s focused heavily on being sterile and biologically safe and reminds me of olden time movies with doctors wearing masks and biohazard suites. Hospital nursery cribs were called Isolettes, a brand name that demonstrated the value placed on isolating each infant. When infants were brought briefly and on a schedule to their mothers from a central nursery, they were often double wrapped in blankets. In many setting, mothers were asked not to open the blankets. The outer blanket was discared as the infant was returned to the central nursery. Nurses wore masks. Those who gave birth vaginally stayed 3-7 days postpartum, and mothers who had undergone cesarean births stayed even longer.

This next part made me cringe in horror.

Newborns were often times not offered the breast or any other milk product for 12 to 24+ hours after birth. They likely would be given glucose water two or three times to test the competency of their esophagus and their ability to handle fluid intake before a chance was taken that they might aspirate formula or breast milk. Care providers were unaware that should a rare case of esophageal atresia cause aspiration, mother's milk was a more biologically compatible fluid if it entered the lungs than was the glucose water being used as a test fluid.

"In restrospect, it would be difficult to have designed a health care system more damaging to breastfeeding than the one described." 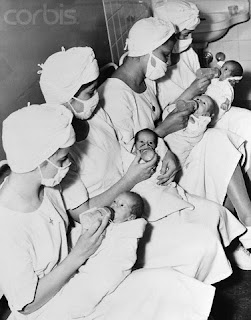 While in the hospital, mothers were often given potentially irritating alcohol or soap to cleanse their nipples before the baby breastfed. There was little awareness of the advantages of the infant being exposed early to the family bacteria to establish a compatible intestinal flora or the benefit of the mother's natural body oils protecting her nipples. Routinely, bottles of glucose water or perhaps formula went out from the central nursery with the breastfed babies to be given after the infants breastfed. Infants in the central nursery who cried when it was "not time" to be taken our to their mothers were often fed in the nursery with little thought about the influence on the mother's milk production.


Given a misplaced fear of creating sore nipples, mothers were encouraged to breastfeed for only 3 and then 5 minutes at a time for several days. This timing might have been just long enough to create a milk ejection. Then the infant was removed, increasing the likelyhood of engorgement for the mother and the need for alternative feedings for the hungry baby. (Moon & Humenick, 1989). In the 1960s, after infants went home, they were frequently given solid foods beginning at about 2-4 weeks of age. Little thought was given to the fact that the rapidly growing infant needed calcium and other nutrients contained in breast milk, more than the nutrients in cereal or other baby foods. It was common to hear a mother say she could not breastfeed because her physician told her that her milk was "too thin" or that it was "too rich". Only manufactured milks were considered by many to be scientifically and reliably formulated and readily measured. Indeed,breast milk was portrayed as somewhat risky because the content and quantity were not readily observable.

The variety of practices that effectively sabotaged breastfeeding was only slowly replaced as researchers began to document more effective care to promote breastfeeding. In many settings, a number of cited harmful practices carried over well into the 1980s, and vestiges can still be readily found as we enter the 21st century, especially here in Aruba.  In restrospect, it would be difficult to have designed a health care system more damaging to breastfeeding than the one described. Furthermore, some of the same maternity care practices have been spread to third-world countries that have looked to the industrialized nations for leadership in health care.

That, ladies and gentleman.. is the early history of formula and the downfall of breastfeeding....
Posted by Wendy Maduro at 1:30 PM