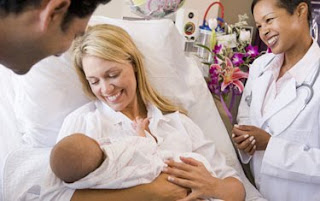 What is it about homebirths that freak people out... What is it about hospital births that make people feel safe. I ponder these questions often times, even asking myself, why should I be afraid to birth my next baby at home? I've already told my mother about it, and she responded with "Well, when you're done, and everything's cleaned up, then you can call me and I will come over". I didn't get the, 'you're nuts!' that I usually hear, but I knew that's how she felt. My father one the other hand, well, if there were 135 different ways to say, 'are you crazy', you better believe he'll find 136.

People always cite their fear of homebirth because of what can potentially go wrong. Of course, who can blame them, it has always been that time and unforeseen occurrence befell all of us, and unanticipated events during childbirth is not to be excluded. But I always follow up with a question such as "How many babies and mothers die in the hospital, yet the majority don't even think twice about giving birth there." As I mentioned in yesterday's blog on homebirth, although hospitals and obstetrical care would like to take full credit for improving statistics on maternal and fetal outcomes in comparison with centuries ago, the truth is that, these better results come not from more c/sections and higher intervention rates but because of better nutrition, hygiene and disease control. A dear friend of mine that is in his eighties told me of a time that many women stopped dying because the birth assistants learned to wash their hands before handling the laboring woman. So as long as hospital births are seen as normal and obstetricians are seen as the "real deal", homebirths will remain the 'hippie, hedonistic' approach to childbirth.


Why, despite so many success stories do people hold on to that one horror story of a homebirth and deem all other homebirths just as 'dangerous'? Why do so many mishaps and tragedies happen with mothers and babies in the hospital yet no one says, "hospital birth?! NO WAY!".


I was fortunate enough to have a folder in front of me with statistical data about Aruba from the year 2001. The section of homebirth is very modest and straightforward. It shows us that in 2001, 96% of births took place in the hospital and 4% took place at home. It also tells us about the prenatal care, or at least the care during childbirth. 75% of all births in 2001 were overseen by an Obstetrician and 21% were under the direction of a midwife and 4% were 'other'. It doesn't mention what they are referring to specifically.We see that from the ages of 16-24
From ages 25-44
In 2001

Why this drastic leap from 67% to 14% with midwife assisted births? Is it because of the increased maternal age and the subsequent complications? In Aruba it is protocol for a woman 35 and older to automatically fall under the care of an ob/gyn.  There she will automatically have an ob assisted hospital birth. It's nice to see a c/section rate at 17% however, back then, we were an island of 100,000 inhabitants ( now it's like 110,00, somewhere in that range). A midwife friend of mine told me that after completing her midwifery studies in Holland, upon arrival on Aruba, she came to find out that Aruba had the third highest c/section rate in the world, and that when a particular ob/gyn retired, all of a sudden the c/section rates dropped significantly. It was a known fact that, that obstetrician cut primips up at the drop of a hat. Oh, is  my day shift nearly done? Let's get you to the OR, oh? Is it Friday today? Let's get you to the OR, oh? Is tomorrow a holiday? let's roll you right into the OR, Oh? Is my vacation coming up a few days from now? Well then, by all means, let's schedule that "birth" of yours! NO vaginal birth for you! You know the soup Nazi from Seinfeld? Well he was the vaginal birth Nazi.In any case, I've veered off enough with my anecdotal stories. Back to the homebirth.

I will dare to mention that 4% homebirths are, well, they're something. It's not so high, but I'll take it. Of the many women who have homebirths, many are multip women (women who've had more than one child). I enjoy reading and hearing homebirth stories of primips ( first time moms). One of those stories was a friend of mine. She had her first daughter in the comfort of her own home, with her midwife present and her CBE turned Doula present. Her birth was uneventful in that there were absolutely no problems or complications. She and her baby girl turned out just fine and enjoyed a wonderful breastfeeding relationship.

Why, despite so many success stories do people hold on to that one horror story of a homebirth and deem all other homebirths just as 'dangerous'? Why do so many mishaps and tragedies happen with mothers and babies in the hospital yet no one says, "hospital birth?! NO WAY!". Why? Well, I already answered that question in part in the blog before. Midwives are 'bush doctors', and obstetricians are 'life-savers'. Now while, the latter is true in the sense that, an OB can save your baby's and your life if a deadly complication arises and immediate cesarean is needed, an OB will also be more impatient with your labor, deeming your labor as "failure to progress" in need of a c/s when he has a busy day and an overfull practice.

Many will deem women who are searching for a better birth experience the second, third or even fourth child around as, "those" mothers... You know, A "birth nut". A mom more concerned with having birth balls, candles, and serene music than with having a healthy baby. I've often heard mothers tell birth stories that involved a health-care provider who clearly believed the mother was being reckless with her baby's life, and that the provider was the only one interest in a good outcome. 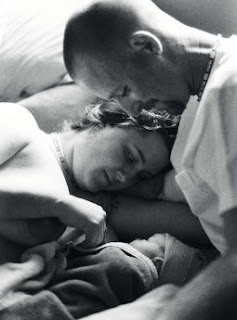 But there is the thing: Sometimes, we in the natural birth community give our physicians, friends, families, and neighbors reasons to be leery of our motives. Our talk about the 'experience' of childbirth peppers our conversations and affirms to doubtful audiences that women who want low intervention or natural birth are selfish, compromising the health and safety of their babies for that 'mountaintop' experience. But how then can we get through to those 'mainstream' moms who agree to a laundry list of interventions in their births, never once suspecting that they may be receiving second-rate care?

When reading "Hitting the right notes",my attention was drawn to a website that lists 35 reasons to choose a home birth . They listed reasons suchs as, "Your pets can attend. Seriously. Pets are family, too." and "You don’t have to sign out when you leave your house" and not to mention " Having a home birth is different. Different is cool." and lastly but certainly not least " You can have as much sage, incense, candles, whatever, as you like." Of course, for us "birth nuts" we can read this list and be ok with it, but for a first time mother who is apprehensive about her upcoming birth in any setting, she will easily read and dismiss this article thinking 'but what if something happens? The candles aren't worth it' and will go on to look up her "safe hospital birth!". Many times, when women describe their homebirth or their home waterbirth they'll speak and make a lot of mention of the emotional aspects of it and how healing it was to them, making up for all the past trauma of the birth(s) prior to that one.

While none of these messages are wrong, we know that the emotional aspect of birth is undervalued or even negated. However, our emotions affect our physical state, so when we talk about the emotional well-being of mothers, we are actually talking about creating optimal conditions for a physically safe birth. Taking into consideration that a woman who is not yet on her "quest" for a positive birthing experience, will have a short attention span. Having said such, we must choose our words wisely. Displaying both the emotional aspects giving birth naturally at home, and the many physical benefits to mother and child.

It's not easy to get people to see the safety of home births and the reailty of hospital births. But with kind persistence and patience, mothers will come around and more will warm up to the idea. It will no longer be necessary for a woman to experience a bad first or second birth to wake her to the realization of  wanting to be in control of her subsequent birthing experience. Birthing at home will be the norm for all low-risk pregnancies....