Birth practices of the early 1900s 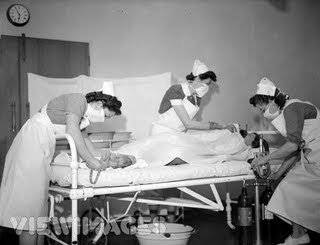 At the turn of the 20th century many experiments were being made on laboring women. Gynecology and Obstetrics took on a more sterile and stoic look. The natural was discarded for something controlled, for the metal and cold. In 1902, a German named von Steinbuchel introduced obstetrical analgesia and what became knows as twilight sleep, which is a combination of scopolamine hydrobromide and morphine sulfate. The method was considered successful if the mother remembered nothing about birth. Three American women wrote an article that was published in McClure Magazine in 1914 about visiting Germany and seeing women give birth safely and painlessly. In the same year, the Journal of the American Medical Association rejected twilight sleep because of its dangers. This action led to the formation of the Twilight sleep Association. This social movement organized rallies in major cities to demand that doctors accept this technique to end maternal suffering during labor. The Twilight sleep Association lost the interest of women and the press after negative reports on the use of scopolamine on newborn infants and the death of a well -known leader during childbirth.

Twilight Sleep relied solely on amnesiacs (substances used to cause temporary amnesia). These amnesiacs produced in a woman a sort of "twilight sleep" from which she would awake with a baby and virtually no remembrance of labor except perhaps a vague concept of occasionally surfacing in a bad dream. The combination of scopolamine and morphine was most commonly used for this purpose. Unfortunately, many women suffered from delirium and hallucinations, necessitating close monitoring. Also, because infants were often depressed and with both the mother and baby sleeping for hours or lethargic after the birth, the mother-infant interaction that is so important in the development of a bond between mother and infant was negatively affected.

Currently, amnesiacs are seldom if ever used. Their importance lies in that they shaped the view of labor by women and the public for a generation. That view lives on in the oral history of many families. For example, grandmothers who received scopolamine have no concept of finding their strength in labor or experiencing ecstasy; grandfathers may have sat down the hallway and listened to their wives scream for hours. These experiences may then shape the view of some of today's expectant parents through what families do or do not say about birth. The scopolamine era also contributed to the public's vision of an infant needing to be spanked at birth to breathe as compared with being warmly welcomed. Such imagines Live on in the public for generations after they are no longer a reality....
Posted by Wendy Maduro at 7:10 AM