Are you a Babywearer? How Long have you been carrying your baby/child?

Babywearing is an art. Once you find the right carrier for you and your little one, it's hard to let go, even when you know your personal journey has reached it's completion until the next little one (for some this means waiting on grand-kids!) comes along.

Some see babywearing as merely a cultural difference, some see it as a step backwards, and some understand the benefits and strive to teach others about it by word and example. 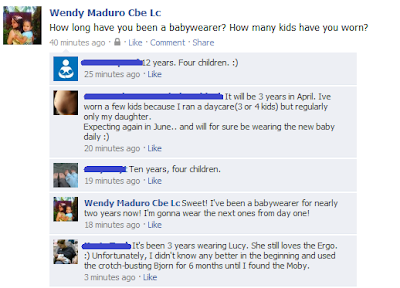 I know by experience that once you start babywearing, and get to know all the carriers there are out there on the market, it can become almost like an obsession, with the carriers that is. I've been wearing my daughter for about 2 years now. Planned on wearing her from birth onward, but bought a crotch-dangling Bjorn, and quickly gave up the idea when she hit 12-15 lbs. I simply could not bear the pain the straps caused me and thought all carriers were alike. Well, they're not. At well over 30 pounds, I still carry my 3-year-old daughter comfortably with a wrap and mei tai, and for short periods, a pouch or ring sling.

Babywearing is slowly but surely gaining speed in Aruba and I'm sure it will explode very soon. More and more mainstream baby stores are selling pouch slings and mei tais, exposing more parents to at least the thought of carrying their child instead of pushing it in a stroller or dragging it in a carseat. My hope is to see more slings than strollers on the street. Many parents carry their children in their arms, why not use a sling then? It's much easier..

In conclusion, no matter what is said or done, no one can or will completely eradicate babywearing. The CPSC can issue as many warnings as they'd like (for the actual dangerous carriers, but it ended up pitting most mainstream parents against all carriers), anti-babywearing/attachment parenting advocates can spread lies about wearing your child, but the fact will always remain, babies were meant to be held close.