A recent systematic review and meta-analysis of case-control studies revealed a possible link between hyperemesis gravidarum, or severe nausea and vomiting that causes weight loss,  lasting beyond the first trimester and the gastrointestinal bacterium named Helicobacter Pylori. According to the Helicobacter Foundation, H. Pylori is:

"a spiral shaped bacterium that lives in the stomach and duodenum (section of intestine just below stomach). It has a unique way of adapting in the harsh environment of the stomach.
The inside of the stomach is bathed in about half a gallon of gastric juice every day. Gastric juice is composed of digestive enzymes and concentrated hydrochloric acid, which can readily tear apart the toughest food or microorganism. Bacteria, viruses, and yesterdays steak dinner are all consumed in this deadly bath of chemicals. It used to be thought that the stomach contained no bacteria and was actually sterile, but Helicobacter pylori changed that.
The stomach is protected from its own gastric juice by a thick layer of mucus that covers the stomach lining. Helicobacter pylori takes advantage of this protection by living in the mucus lining. 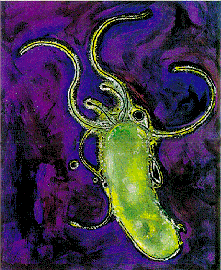 Once H. pylori is safely ensconced in the mucus, it is able to fight the stomach acid that does reach it with an enzyme it possesses called urease. Urease converts urea, of which there is an abundant supply in the stomach (from saliva and gastric juices), into bicarbonate and ammonia, which are strong bases. This creates a cloud of acid neutralizing chemicals around the H. pylori, protecting it from the acid in the stomach. The reaction of urea hydrolysis is important for diagnosis of H.pylori by the breath test.

Another defense H. pylori has is that the body's natural defenses cannot reach the bacterium in the mucus lining of the stomach. The immune system will respond to an H. pylori infection by sending white cells, killer T cells, and other infection fighting agents. However, these potential H. pylori eradicators cannot reach the infection, because they cannot easily get through stomach lining. They do not go away either, though, and the immune response grows and grows. Polymorphs die, and spill their destructive compounds (superoxide radicals) on stomach lining cells. Extra nutrients are sent to reinforce the white cells, and the H. pylori can feed on this. within a few days, gastritis and perhaps eventually a peptic ulcer results. It may not be H. pylori itself which causes peptic ulcer, but the inflammation of the stomach lining; i.e. the response to H. pylori.

H. pylori is believed to be transmitted orally. Many researchers think that H, pylori is transmitted orally by means of fecal matter through the ingestion of waste tainted food or water. In addition, it is possible that H. pylori could be transmitted from the stomach to the mouth through gastro-esophagal reflux (in which a small amount of the stomach's contents is involuntarily forced up the esophagus) or belching, common symptoms of gastritis. The bacterium could then be transmitted through oral contact."

A few years back my mother started suffering from upset stomach, and heart burn rather frequently. She was diagnosed with GERD, and was sent to do a gastroscopy to check things out. Her test came out inconclusive and she was subsequently diagnosed with H. Pylori. She was put on treatment, which is simple antibiotics, and experienced much relief afterwards. Her test still says inconclusive but she's experiencing much less stomach problems now.

Now, what about this link between hyperemesis gravidarum and H. pylori? The findings are as follows:

Objective. To summarize the evidence from epidemiological studies examining the association between Helicobacter pylori infection and hyperemesis gravidarum. Design. Systematic review and meta-analysis of case–control studies. Material and methods. We searched the Medline/PubMed, Embase, Cinahl, ISI Web of Science and Biological Abstracts databases from 1966 to 17 June 2008 and finally Google Scholar. A total of 25 case–control studies were identified. Both fixed-effect and random-effect models were used to synthesize the results of individual studies. The Cochran Q, τ2 of between-study variance and index of heterogeneity (I2) were used to evaluate heterogeneity. Heterogeneity between studies was examined by subgroup and random effect meta-regression analyses. Publication bias was evaluated. Results. Publication bias was not observed. The random model pooled estimate was odds ratio = 3.32, 95 % confidence interval (CI): 2.25–4.90. A high heterogeneity was pinpointed (I2 = 80 %, 95 % CI: 65–89). Subgroup analysis and meta-regression showed a weaker association in studies with a clear definition of hyperemesis gravidarum compared to studies without this condition, and weaker association in recent studies compared to earlier studies. Meta-regression showed that these two study characteristics explained 40% of heterogeneity between studies. Conclusions. Exposure to H. pylori appears to be associated with an increased risk of hyperemesis gravidarum. The residual heterogeneity might have different reasons. Given the high prevalence of H. pylori, the public health consequence of H. pylori with regard to hyperemesis gravidarum may be important.

The results of this review suggest that H. Pylori infection is a significant risk factor for hyperemesis gravidarum. Since H. Pylori is a common infection that can be treated with medications that are safe for use in pregnancy, the results of this review provide important clinical information for maternity care providers and women experiencing severe, persistent nausea and vomiting in pregnancy, as diagnosis and treatment of H. Pylori may provide relief from that condition.

Now that I look back, knowing this, during my mother's last pregnany, she experiences severe and persistent vomiting and gained only 9 pounds (of which my sister was 7) throughout her whole pregnancy. I wonder if maybe it could have been this?

If we, in the future, encounter any client going through this ordeal, perhaps we could suggest her getting tested (it's a simple blood test) for H pylori. As was mentioned above, the treatment is simple and safe during pregnancy and can provide a world of relief