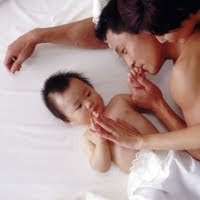 Controversies concerning parent-child cosleeping abound in both the popular parenting advice literature and professional scientific literature. Previous researchers have suggested that an understanding of the familial and cultural context of children's sleep might help resolve some of the controversy. The two studies described here are attempts to explore the context of cosleeping.


Why Do Some Families Share Sleep?
Anthropologists have observed that cosleeping is common in collectivistic cultures (where the needs of the group are considered more important than the needs of individual group members), and solitary sleep is common in individualistic cultures (where the needs of individuals generally overshadow the needs of the larger group).1,2,3,4 Some people assume that the relationship between sleep and belief systems generalizes to specific families-that parents of solitary-sleeping children endorse individualism and want their children to learn to sleep alone so they will learn to behave independently. Alternatively, the reasoning goes, parents of cosleeping children endorse collectivism and share sleep specifically to teach children that families function, even in sleep, as a whole rather than as separate individuals.

To test the truth of this assumption, I surveyed 215 mothers with a child between the ages of six months and five years.5 I asked them about their family sleeping arrangements and their beliefs with regard to individualism and collectivism.

The mothers were recruited from childcare facilities in two California cities. The majority of mothers (63 percent) endorsed cosleeping for newborns, but endorsement was much less common (15 percent) for toddlers and quite rare (5 percent) for preschoolers. Black mothers were more likely than white mothers to endorse cosleeping, with Latinas in the middle. Single mothers were more likely than married mothers to endorse cosleeping. Mothers with less education and lower incomes were more likely to endorse cosleeping. All of this was consistent with the findings of prior researchers. Contrary to expectations, however, no evidence was found of a relationship between individualism and solitary-sleeping endorsement, or between collectivism and cosleeping endorsement. This suggests that parental beliefs about where their children should sleep do not reflect these broad cultural belief systems.

A majority of mothers, whether their children coslept or not, reported believing that cosleeping is good for their ability to comfort their children (79 percent), for family closeness (73 percent), and for their children's emotional health (70 percent). In addition, a majority reported feeling that cosleeping interfered with their own sleep (69 percent), their partner's sleep (67 percent), and the adult relationship (66 percent). These are common arguments for and against cosleeping, but they don't seem to be mutually exclusive. Most mothers surveyed think that cosleeping has both advantages and disadvantages. However, beliefs on two issues tended to distinguish cosleepers from solitary sleepers. Mothers of cosleepers were more likely than mothers of solitary sleepers to believe that cosleeping keeps children physically safe and helps children get a good night's sleep. These may be more important considerations for parents than cultural issues. Parents' beliefs about the appropriateness of cosleeping were strongly associated with the actual sleeping arrangements of their children.
Most of the children studied (74 percent) had coslept in the previous month. However, as other researchers have suggested, it appears that there are various types of cosleeping arrangements.6 Slightly more than half the cosleepers in this study were intentional cosleepers; that is, the parents wanted to cosleep. Slightly less than half of the cosleepers in the study were reactive cosleepers; that is, cosleeping occurred in reaction to existing childhood sleep problems.

The biggest surprise, however, was the relationship between individualism/collectivism and actual sleep behavior. Contrary to expectations, the more individualistic a mother, the less often her child sleeps alone, and the more collectivistic a mother, the less often her child cosleeps. It is possible that individualism and collectivism operate very differently at the individual level than at the cultural level. Perhaps cultural individualism creates a norm for solitary sleep, and cultural collectivism creates a norm for cosleeping. At the individual level, however, individualism may allow parents to ignore or defy the social norm, while collectivism may predispose parents to follow the norm with regard to family sleep. If this is indeed true, it will require researchers to seriously reconsider widely held assumptions about what cosleeping means in families.
In addition to the influence of cultural beliefs, family sleeping arrangements also seem to be driven by practical concerns about safety and sleep quality. It remains to be determined to what extent family sleeping arrangements are influenced by expert advice, past experience, and pragmatic considerations (infant temperament, breastfeeding status, size of parents' bed).

Different Types of Cosleepers
The distinction between reactive and intentional cosleeping seems valid. To document the degree of accuracy in these descriptions, I put a survey about family sleeping arrangements on-line and invited members of parenting e-mail discussion groups to share with me what sleep is like in their homes.7 Within a few weeks, 767 parents with at least one child age five or younger completed my survey. They were mostly white, well-educated women in the US, but ideologically they were quite diverse. Based on their responses, I divided my participants into three groups: solitary sleepers, intentional cosleepers, and reactive cosleepers. As I suspected, the intentional and reactive cosleepers were very different from one another; but there were also some surprises.

There were some surprises that challenge the simplicity of that distinction, however. While reactive cosleepers have more frequent sleep problems than other children, only 13 percent of parents of reactive cosleepers report that sleep problems occur frequently or always. Furthermore, few parents of reactive cosleepers (13 percent) actually report dissatisfaction with their family sleeping arrangements-far from the popularly portrayed picture of miserable parents. For most parents, reactive cosleeping is simply a fact of life, neither a tremendous burden nor a great gift. As one of my respondents stated: "It is not what I planned, but my daughter really needs to be with me, and I need to get my sleep. It works for us."

On the other hand, intentional cosleeping isn't exactly the blissful experience sometimes described. More than 20 percent of intentionally cosleeping parents reported some disagreement with their adult partner over sleeping arrangements, and half reported that their child has sleep problems at least occasionally. Several parents added comments to their surveys, offering insight into the difficulties of cosleeping. One mother wrote, "I just want you to know that it's hard. Sometimes I'd like to cuddle with my husband, but there's a child between us. Sometimes I get awakened with a kick in the chest. But I know I'm doing the right thing for my child, and it is precious to wake up to his sweet smile. But I want you to know that it's not always easy."

What We Don't Know
Understanding of cosleeping will come slowly. At this point we know very little, although most parents (and researchers) have opinions. At times like this, when a practice is fiercely debated, it is essential to recognize what remains unknown. The research I have described suggests that cultural beliefs have little influence on sleep, that the relationship between cultural beliefs and behavior is quite complex, and that there are very different types of cosleeping. Now let's consider the questions that remain unanswered:
It is important to acknowledge that no one really knows the answers to these questions. Many of us have opinions based on our own personal experiences, our ideological assumptions, stories we have heard, or just what seems reasonable and likely. But the truth is that none of us can really know for sure. In fact, the scientific community has very little evidence on these important questions.
Consequently, arguments for or against cosleeping must be acknowledged to be speculative and not definitive. While the social and medical sciences continue to advance our understanding of children's sleep, there is still a long way to go.

Kathleen Dyer Ramos, PhD, is an assistant adjunct professor of family and community medicine at the University of California-San Francisco's Fresno Medical Education Program, where she teaches evidence-based medicine. Her job includes teaching resident physicians about childhood sleep and conducting her own pediatric sleep research. She also teaches a parenting class at California State University-Fresno and is the mother of two young daughters.