The Doll that breastfeeds - Bebe Gloton 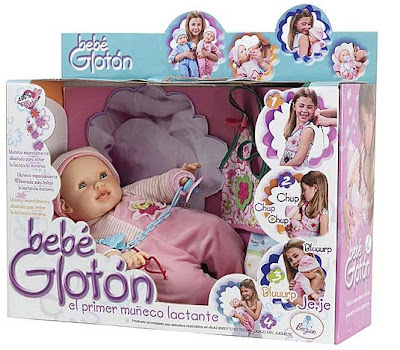 My daughter and I reached by my mother's home and to our surprise Dahlia got a new baby doll as a gift! But wait.. oh yeah.. the inevitable confrontation starts in five..four..three..

The baby came with a bottle to be able to feed it, DUH. Baby needs to drink milk right? How on earth would a baby get milk unless it was from a bottle!

So I grab the bottle, I look at it, I look at my mom and I think to myself 'ok Wendy, let's not go about this in a fanatical dogmatic way... because this can get sticky'. So politely I hold the bottle in my hand with a slight perplexed look on my face as I start threading this unfamiliar ground. I look at my mom and I thank her for loving Dahlia and providing Dahlia with a nice baby to play with, however, I don't think I want Dahlia playing with any bottles. "WHaaaaaaaaaaaAAAAAAAt?!?!?!?!?! WENDY STOP your STUPIDNESS!" 'Oh goodness'.. I think to myself as I roll my eyes. Yes mom, you heard correctly, I don't want Dahlia playing with bottles making her think that that is the "normal" way to feed babies. Then, my mom uses a common line of false reasoning.. "Oh so you mean to say no bottles then..so what happens to moms who work?! "No mom, this has nothing to do with that. Of course moms who work have to use a bottle, but that's not the point", and so ensued an almost heated debate about 'exposing' little girls 'too early' to breastfeeding.

To follow up on this I would like to introduce you to this Bebe Gloton, a doll made not for bottle feeding, but yes, you guessed correctly, a baby made for breastfeeding. WOW! Why on earth did this concept take so long??

This genius invention is by a Spanish toy maker named Berjuan. This doll was made with the express purpose of exposing young girls to breastfeeding in an effort to normalize breastfeeding again. I find that this is an incredible doll, however, when you look up 'Bebe gloton' on youtube the reactions are less mixed than they are horrified and disgusted.

Well, it's simple, and it is not my intention whatsoever to hypothesize how people came to find breastfeeding sexual etc etc. That's a whole story all by itself. Ok then, we recognize that people in general find breastfeeding ok, as long as it is done within the privacy of your own home. Teaching a little girl to breastfeed by means of this doll, well that is UNACCEPTABLE, according to most people. But why? Why is it ok for little girls then to feed their dolls bottles? A lady in the youtube video of Bebe Gloton said and I quote "I nursed my daughter until she was 6 months old, which I think is fine, but I think it goes a little far having your little girls do it". Ok Ma'am, I guess after you nursed your daughter for only six months you switched her over to formula right...? Case closed. I'm not bashing formula or women who chose to nurse up until 6 months for whatever reason ( I myself switched to formula when my daughter self weaned at one). However, how could you yourself have chosen to breastfeed your daughter, but that same daughter, you won't allow to play with a doll that mimics something so natural and teaches and impresses upon her mind something so normal as breastfeeding. I personally think that that is ambivalence right there.

As you have seen, even some women who have breastfed their infants, find it unacceptable for those same infants who were nourished from their mother's breasts to play with a doll that mimics this act. This is perplexing to me, but then again it's not. I've come across many different and many times strong emotions of repugnance in people where breastfeeding is concerned. The thought alone makes them feel nasty and dirty. This is not God's fault. He did create breasts for that purpose. So how could He possibly think that breastfeeding is "dirty" or immoral in any kind of way. Where did this attitude come from? Like I said, I'm not going in to details lest I be here all night theorizing about it. So let's get to the point then. How far is too far when it comes to letting our daughters play with breastfeeding dolls? Where do we draw the line?

In July, UNICEF's Regional Director for the Caribean had a meeting with all the NGO's in Aruba. I was privileged to be part of that. Mr. Nils Kastberg pointed out that breastfeeding education and support should be well established by the time a girl enters puberty. He said " A girl, when a teenager, should think to herself, 'When I get older and have a baby, I'm gonna breastfeed it!' " . Mr. Kastberg emphasized the importance of forming a balanced and positive attitude towards breastfeeding in the early formative years because by the time a girl hits puberty, she has imprinted in her mind how she will feed her future offspring. This was such an enjoying part of the discourse. Mr. Nils gave such deserved attention to breastfeeding and it's importance. I spoke with him after the presentation was done and I thanked him for showing so much attention for nursing and not just glossing over it. So... UNICEF recognizes that children need to be taught from small. Not by word.. but by deed. Every time a mother nurses her baby with the older child(ren) watching, she is teaching them. Kudos to all you moms who nurse 2nd, 3rd and 4th children!

So... how did it end up with my mom and this play bottle situation. I did find the bottle in Dahlia's toys again, so I hid it :) . You know what my 17-month-old daughter does now to nourish her doll? She sits down, lifts up her dress and holds the baby to eat 'mum-mums'. My heart swelled with joy when I saw that... Kudos to me..
Posted by Wendy Maduro at 1:16 PM