How Babywearing got its start on Aruba 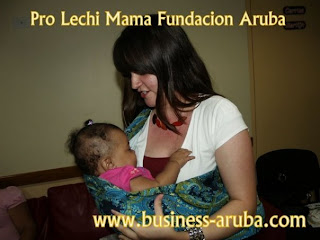 The photo above was taken June 25th 2009. It was the re-launch of our breastfeeding support groups and it was a night I won't soon forget. Not only was the re-start of our support groups very exciting for Pro Lechi Mama, but I was especially stoked because it was the first time I started teaching moms about the art of babywearing.


Bringing babywearing back
Babywearing is not a new concept anywhere, and that includes Aruba. There have been many individual advocates in the past who've raised awareness about babywearing. These include Tamara Loefstok from Mommies & Bellies, and Shanti Gould from Prana. These themselves were babywearing mamas, and have in the past organized events having to do with babywearing and have advocated the practice. Tamara, a babywearing mama of two and maternity store owner, recounts to me the Sling Fashion Show she had organized at an Expo some years behind. Then, for some years, babywearing had slipped into the background until the early part of 2009.

In the beginning months of 2009, after seeing so many beautiful slings in Fitpregnancy, I decided to purchase some and hopefully sell them if I found any mother who'd be interested. Little did I know! I ordered a black ring sling from Maya Wrap, and a green paisley pouch sling from Slinglings. Because of the negative experience I had with the cumbersome and oh-so expensive Baby Bjorn, I had dismissed babywearing....that is... until I slipped Dahlia into one of my new slings! I fell in love! I carried her all over with me, in town, in the house, at the supermarket. People would stop and stare and many times tell me how beautiful the carrier was and how handy it was too! As the days passed, I engrossed myself in learning everything I could about babywearing. I carefully studied the manual that came with each of my slings, and I searched all over the internet for info on safety, positioning and more. Moms fell in love with my slings, and I fell into my role as a Babywearing Educator. For a certainty, I am the first to officially have classes and consults on babywearing, and as babywearing grows, I know I won't be the last! 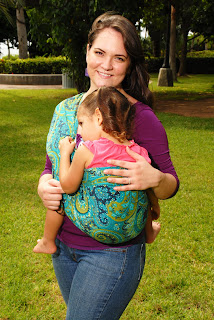 Babywearing gets a jump start
As the months passed by, and I continued showing moms how to use the slings at the breastfeeding support groups, an old friend returned to Aruba. She was pregnant and had some very good sewing skills. Of course she saw my slings, and when she told me she was going to sew her own instead of buying  commercially made one, a light bulb went off in my head. Some weeks passed and as she neared her due date, I approached her with an idea. "What if you make the slings, and I refer people to you when they want to buy one?". It was an amicably accepted idea by both of us, and she did it. I was one of her biggest supporters and first customers. Finally! "Babywearing is going somewhere!" I thought. I'd purchase many slings from her and contributed a lot of fabric to her new sling making business and I was glad to do it for the sake of babywearing. As the months rolled by, she got more and more customers. She soon added the making of mei tais to her repertoire.
I could rely on her because she was not only an experienced seamstress, she also was a babywearer. Who knows best what works and what doesn't, what's comfy in a sling and what isn't than a combo of those two!
For many months we collaborated together.


Taking a different turn
I began offering more formal classes in the form of powerpoint presentations in which the parents also got a chance to test out the many type slings I had accumulated. A dear friend of mine, Noortje van Pelt, and I started out with this concept, but later decided that I would continue alone until her children were older and she could dedicate more time to it. I'll never forget the valuable tips, tricks and knowledge she imparted to me and I am grateful to her for introducing me to the oh so wonderful wrap! At the same time, Shanti Gould a certified yoga instructor, whom I'd met in December of 2009, invited me to give quarterly workshops on breastfeeding and babywearing at Prana, Aruba's leading yoga center. What better than giving classes on the two things I loved most! I felt extremely privileged by this invitation and remain grateful to Shanti for combining forces and putting babywearing to the fore.

After over a year of teaching, buying slings, speaking to moms, speaking to nurses, speaking to doctors about babywearing, I also started renting my slings out. I bought each type of carrier so that moms who weren't ready or financially able to commit to an unfamiliar carrier, could try it out in the comfort of their own home for 1,2 or 3 weeks at a time. This has also proven to be a very successful endeavor that is still growing! I've rented out my carriers to former breastfeeding clients, friends, even adopting parents. I've recently completed a photoshoot for CariBirth's step-by-step picture guide using local moms and close friends.


What the future holds
Because I come in contact with so many (expectant) parents, I get asked nearly all the time if I make and sell the slings myself. Due to time constraints and other obligations (like working a full time job, being a business owner on the side, mother and wife) I was unable to produce and sell the slings myself. Recently, however, my priorities have shifted and I decided that my business would start not only making slings, but also eventually start importing them as a wholesaler. This was decided with no ill intention but to give the parents a wider variety of choices and to further babywearing even more! I'm proud to announce that I have 3 orders in already for custom made Bella Sophia Carriers! I work closely with another seamstress and parents have the luxury of not only purchasing slings but also receiving a free complete consultation and step-by-step picture guide with each purchase. Moms (and dads too!) can leave with their purchase feeling fully confident in themselves and their ability to practice safe babywearing. This is just the beginning for my small business CariBirth. I see big, bright opportunities that lay ahead.


I'd also like to finish off by taking the opportunity to thank those who have and still believe and support CariBirth and babywearing. Minouche Lopez, my eternal mentor and one of my biggest supporters, Noortje Van Pelt, my original partner in crime and experienced babywearing friend. Andrea Justina my eternal breastfeeding and babywearing model who doesn't miss an opportunity to spread some babywearing love around, Jury & Joanna, two childhood friends of mine who've blossomed into beautiful babywearing mamas themselves. Angie Geerman, another knowledgeable babywearer and close friend, Shanti Gould, for believing in me and helping me get out there, and last but not least, Dahlia, the baby (now 3-year-old who still loves a sling ride!) who started my love affair with carriers. 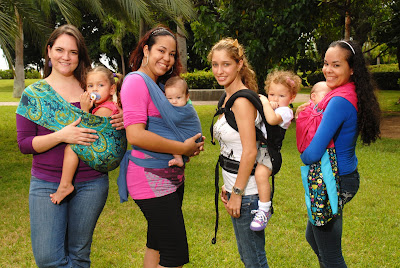 Do you have any questions about babywearing? If so, feel free to contact Wendy Maduro at 297-593-4444 or send an email with your babywearing photos to info@caribirth.com