What is a Blessingway?

Babyshowers are a common and widespread tradition that many participate in. They often include many gifts for the soon-to-be parents, which may alleviate the burden of having so many baby things to buy. Babyshowers these days, however, have become very commercialized. They focus more on the giving of gifts, and playing of games, rather than the honoring of the mother-to-be and preparation for the labor and birth of her baby(s).

A Blessingway ceremony, is thought to have originated with the Native Americans. It was seen as a rite of passage when a young girl first enters young womanhood with the onset of Menarche, and was also celebrated with she became a mother.

A blessingway these days, has become more familiar due in part to the fact that women are reclaiming their bodies and birth rights. They are becoming more aware of the process of childbirth and wish to be more involved in the grand scheme of things. In saying so, they have come to realize that the pregnant woman is actually on a special 9+ month journey that will culminate in a spectacular and special end, the birth of her child(ren).

While many focus on the physical and material aspects of childbirth, which is of course natural, we sometimes tend to forget the mental and emotional side of it. Worries, anxiety or physical ailments during a pregnancy can wreak havoc on the emotional wellbeing and balance of the mother. Even a normal and 'uneventful' one can be stressful if the mother has little information or support from loved ones. A Blessing way can strengthen her resolve and help her to recenter her thoughts and goals.

What do you do at a Blessing Way?
The main focus of a Blessingway is the expectant mother and her emotional needs. Thus said, the point of the ceremony should be to give her courage to face that fast approaching day. Usually the group is kept small with only a few close relatives and/or friends. The women who inspire the mother the most, the ones she feels most safest with are the ones who attend the Blessing Way. Some choose to do the following: Each attendee brings along a bead or two (depending on how many are present and what you're making, a necklace will require more beads) that he/she picks out as special. All those at the Blessingway sit in a circle and string the beads together, each wishing the mother something special for her birthing day. Expressions may also include birth affirmations. The mother then wears this piece of jewelry on the big day, and my choose to focus on it as a source of strength.
This is the same as the abovementioned, but this headband may be worn the same day (as the flowers will wilt eventually)
The pieces of paper are thrown together, and each reads one aloud for the mother. 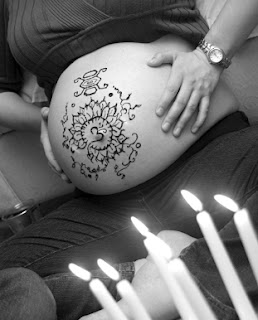 Henna is used often used for beautiful and lustrous belly painting during a Blessingway and is a wonderful memory for the couple of days (or up until a month!) that it lasts. It ties in perfectly with the theme and point of the ceremony

Gifts may also be part of the Blessingway but isn't by any means the focus. The focus is completely on the mother and preparing her for her journey into motherhood, even if it's the second time around.
Check out The Feminist Breeder's Virtual Blessingway and how her friends from all over the globe, sent a token, or more precisely, a flag, for her to hang up during the birth.
Have you had a Blessingway? What was your experience?
Posted by Wendy Maduro at 11:15 AM