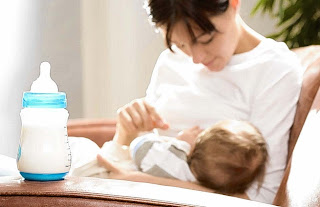 To lactivists, and most people (even formula feeders) the answer is YES!

If you take a closer look and let your mind wander, actually breast is not best, breast is normal. Breastfed babies don't have a lower incidence of Otitis Media and other infections, it's that formula fed babies have a higher occurence of these infections. Breast milk is watered down a lot , and formula feeding is sugar coated too much for fear of offense. But trust me, you don't need to say something in a rude or disrespectful way and tone for people to take offense immediately. Too many HCPs are afraid of "pushing breastfeeding" too much. Too many HCPs are afraid of offending a mother who already chose to formula feed from before her baby's birth.

I'm not saying we must resort to scare tactics to get women to breastfeed, but we must be more straight forward and honest about the effects when it doesn't happen. When a pregnant woman (or any person for that matter) hears "Breastfed babies have higher I.Q.s , are sick a lot less, bond better and easier with the mother, it's just the best choice you can make" ... they then go on to think... "well... I can settle for an Ok baby, with ok , or (the ignorant) 'just fine' health"

No... mothers must hear the truth in a respectful tactful and informative manner. So instead of ;

"Formula fed babies have more ear infections"
"Formula is difficult to digest, especially with a premature digestive system"
"Formula is bland in taste and does not expose your child's palate to different tastes"

Too many women are in the dark about the real pitfalls to formula feeding, thinking it is a convenient and healthy ( but in the long run, not that convenient or healthy) alternative.

Let's take another biological norm, but this one no one dears question

the final act of digestion by which organisms eliminate solid, semisolid or liquid waste material (feces) from the digestive tract via the anus.

If I said, defecating through your anus is the best choice! You'd probably give me a weird look and quietly move away. Or you'd wonder "What the heck is she talking about, it's the biological norm, it's the way it should happen".  You'll never hear something like "Oh well, I can settle for a colostomy, it's an alternative after all..."

"A colostomy is a surgical procedure that involves connecting a part of the colon onto the anterior abdominal wall, leaving the patient with an opening on the abdomen called a stoma. In a colostomy, the stoma is formed from the end of the large intestine, which is drawn out through the incision and sutured to the skin. After a colostomy, feces leave the patient's body through the abdomen."

While this is a permanent or temporary necessity for some cancer patients, you wouldn't dare consider that normal bowel functions are "the best" way. It's the only way. Would you even question the efficacy of the G.I. tract in favor of a less-than-stellar man-made alternative? No.. but why do we do it with breastfeeding then?

We don't want to offend, but we do want to be truthful
Posted by Wendy Maduro at 1:28 PM